Have you ever woken up in the middle of the night with the greatest idea that has ever come to your brain, found a sheet of paper, written it down, gone back to sleep with the satisfaction of knowing your life is now complete, woken up, and then read the sheet of paper?

This happened separately to both Brian and Corinne.

Corinne wrote what she thought was the most beautiful line of poetry ever conceived: "Stormy chompers chopped chompers."

And Brian wrote what he thought was the funniest single sentence ever written: "Do yous has a thermonmentor?" (spelling intentionally part of the joke) to which he fell asleep laughing.

They decided to embark on an exercise to create a video game that combined both creations. This was the result. Inspired to finish by MiniLD73, "Music". If you finish the game, you'll know why.

I've been told this doesn't work in some versions of Safari. So just use FireFox or Chrome or something.

PC version runs much smoother than browser version, obviously. The Android version seems much harder than the other two, but I am super terrible at mobile dexterity. I can beat it, but not easily. So, if you get frustrated with that, play one of the other two.

- Using the In-browser or PC version is much easier than the Android version, because you can move a mouse much faster than your finger. But if you are using the Android version, make sure your phone isn't in power saving low performance mode, which makes the game even harder.

- There is no time limit on any level. Take the time to study each chomper and the possible sounds they make.

- Pre-plan a line of the shortest distance possible between thermonmentor-in, and thermonmentor-out to give you the best reaction time possible. Different chompers intentionally have different distances from their mouth that the thermonmentor goes in.

- There is only one frame (the first frame of the teeth coming down) which will break your thermonmentor. You can stick the thermonmentor back in even before the teeth open if you want to optimize your timing.

- Unless you are more than halfway done with a level, it's usually not worth it to grab the thermonmentor after it breaks. Just calmly start again.

- The patterns on all but the Tutorial Chomper are random, and can be potentially more or less difficult each time through.

- TUTORIAL CHOMPER: This is the easiest chomper. She has just a few sounds, the sounds are very long, and her tell is very different than the other sounds.

- LOST AT SEA CHOMPER: This chomper has quite a few possible sounds, and a few of them are aggressive sounding, but the tell is a very distinct and unique sound. Still very slow and easy.

- MERMAID CHOMPER: This chomper ups the difficulty slightly. The sounds come a bit faster, and there's now TWO tells that predict a chomp. One is a more obvious "mmmmmmehhmmmmmm" but the other is more subtle "reghhhh". Make sure you listen to the sounds until you can identify both tells before attempting the level.

- SURFER CHOMPER: This chomper has even faster sounds, but only one tell, a ramping "huhhhhh" sound. You should also position your thermonmentor further from his mouth than with previous chompers.

- PURPLE CHOMPER: Another big jump in difficulty here. This chomper has two tells, a "egh EGH" sound, and a "raGHH" sound. There's also a fake tell that is slightly more of a "eGH" sound, but very similar to the real tell. It won't matter much if you identify the fake tell as fake, just react to it like a real tell and don't get thrown off when he doesn't bite (but you can identify the difference after playing a while.) The sounds also come faster.

- ROBOT CHOMPER: A big speed increase and slightly different style of gameplay- this chomper actually says words. The three you need to look out for are "Bite", "Nom", and "Chomp." This might be harder than the last chomper, in terms of concentration.

- EVIL CHOMPER: Speed is now its fastest, but this chomper only has one tell. It's easily identifiable as it's much lower in sound than most of the other sounds (although there is another sound slightly similar, but the real one is less rough than the fake one.) Positioning your thermonmentor at the edge and having a good way out is key. This one is much more about reaction time than previous chompers.

Hey, I tried your game and enjoyed it quite a bit~

I made a video talking about your game, amongst others, so I thought I'd share it here:

Thank you for your effort and keep doing what you're doing~ 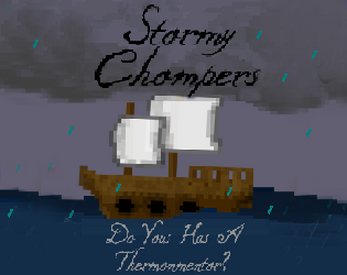